Back to all posts

Most people know that certain instruments must be "tuned up" in order to be played, even if they don't quite know what it means. When talking about guitars (or really any string instrument), tuning not only refers to the act of adjusting the strings to specific notes, but also the set of notes that one tunes the strings to. Many beginners aren't aware that there are actually many different ways to tune a guitar, and these tunings can have radical effects on how the guitar sounds and how it might be played. These different variations are known alternate tunings. In this article we'lll discuss some common ways of tuning the guitar, and how and why you might use these alternate tunings. Having a working knowledge of alternate tunings can help you learn more songs, spark creativity, and even become an overall more well-rounded player.

Standard tuning is exactly like it sounds - the standard way to tune a guitar. From the lowest sounding string to the highest, the strings are tuned to the E, A, D, G, B, and E. (A lowercase "e" is sometimes used to indicate the thinnest, or highest pitched string.) Each string is tuned a musical 4th above the previous string, with the exception of G to B, which is tuned a 3rd above. This has been widely accepted as the standard way of tuning for a very long time, with origins back to an Italian folk guitar known as the chitarra battente. This tuning is popular because it makes most common chords easy to play, and scale patterns are logically spaced out along the fretboard. This is the overwhelmingly the most common way to tune the guitar, and is the tuning of choice for most situations. 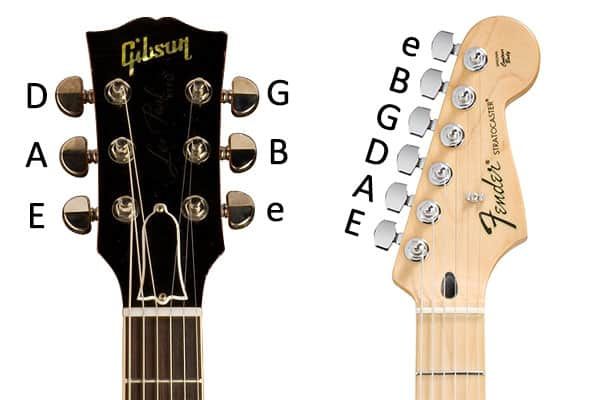 One of the easiest and most common alternate tunings is Drop D Tuning. This tuning starts from standard, but has the 6th string (Low E) tuned down a whole step, down to a low "D" note. The resulting tuning is  D, A, D, G, B, and E. Drop D tuning is now most commonly associated with hard rock and metal genres, but has been widely used in many different styles of music.

The primary benefit to Drop D tuning has to do with power chords. Power chords are a very common type of chord in hard rock music and similar styles, and this tuning makes this go-to chord shape easily playable with just one finger, allowing guitarist to to play more chords with ease. The lower pitch of the bass string also lowers the guitar's overall tonal range, allowing for deeper, more aggressive tone.

Another benefit to Drop D thing is that the open D chord shape can now be played with a low D note on the bass string, resulting in a richer and deeper sound than can be achieved in standard tuning. The trade off, however, is that the other standard chords shapes have to be adjusted, potentially some making them more challenging to play. There are pros and cons with every tuning system, and Drop D is no exception.

Some examples of songs recorded in Drop D tuning include Bat Country by Avenged Sevenfold, and Neil Young's Harvest Moon.

E♭ Standard is what's known as a "down" tuning. Down tunings take the structure and layout of standard tuning, but lowers every string by the same amount. The most common of these is E♭ standard, which lowers each string by one half step down (the equivalent of one fret, or one piano key), resulting in E♭-A♭-D♭-G♭-B♭-E♭ instead of E-A-D-G-B-E.

When using this tuning, the guitar can be played with the same shapes as standard tuning, but the resulting notes and chords are actually slightly lower. For example, when an Em (E minor) chord shape is played, the resulting chord is actually an E♭m (E-flat minor), and an A Major chord shape sounds as an A♭Major. Even though the resulting chords are technically different than normal, the notes/chords/scales will typically be referred to by their standard names on any sheet music, or by the performer for ease of use.

Why tune down if you play everything the same way? One common reason is for vocals, as down-tuning the guitar lowers the overall pitch of a song, which can make it easier for some vocalists to sing along with. This tuning is also used to create a heavier tone, allow the use of thicker strings, and can make bending the strings easier. Some artists take this method further, using tunings like D Standard, which lowers every string a whole step down (the equivalent of two frets), making the strings D, G, C, F, A, and d.

Gun's N Roses' Sweet Child of Mine is a well-known example of E♭ Standard tuning.

An open tuning is created when all the strings of a guitar are tuned to be part of the same chord. When the strings are strummed open, (that is - not pressed down) the result is the world's easiest chord. Some common open tuning examples include: Open G, where the string together create a G Major chord (D-G-D-G-B-D), and Open D, made from the notes of a D Major chord (D-A-D-F♯-A-D).

Open tunings are most commonly used when playing slide guitar. Primarily associated with the Delta Blues of the early 20th century, this style is characterized by a slide (a small metal or glass tube or bar) gently pressed against the strings which can freely slide up and down the guitar neck instead of holding the strings down. Open tunings are preferable for slide guitar, as the slide is a straight object, and open tuning allows chords to be played in straight-line-shapes.

Open tunings are widely found outside of slide guitar and the blues as well, often used in many different styles, including classic rock, Hawaiian steel guitar, and modern genres like math rock, and acoustic fingerstyle.

A Quick Note of Caution

Alternate tunings are a great way to expand your musical horizons, or to help your find your way out of a creative funk. Be sure to take some caution when exploring different tunings however, as guitar strings can snap and break if tuned too tightly. Alternate tunings rarely, if ever, require tuning up (tightening the strings) from standard tuning, instead generally requiring you to loosen the strings. Certain drop tunings may create buzzing sounds, depending on the gauge (thickness) of your guitar strings, which is why artists who frequently use these tunings often have their guitars set up with certain strings specifically for this purpose. If you're not sure how exactly to create the tuning you're looking for, please consult your teacher or a knowledgable acquaintance (your local guitar shop would probably be happy to help as well!)

All-in-all, alternate tunings are an easy and fun way to approach the guitar, so get out there and start exploring!

Ready to learn more? Contact the Milwaukie School of Guitar today to learn about availability for private lessons.